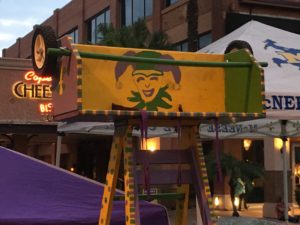 The Mardi Gras ladder is one thing in this world that I love and hate at the same time. Clearly, there are other things I hate and love at the same time….my treadmill, the TV show “Switched at Birth” that my 10-year-old daughter is making me watch on Netflix, and the Randazzo King Cake that my wife keeps showing up with at home. The Mardi Gras ladder is a huge pain to transport across the lake and add to that I need to carry chairs, tables, coolers, paper towels, cameras, etc. My 14-year old son Preston gladly carries the Popeye’s bag full of fried chicken, my daughter Lucy carries a few empty Mardi Gras bags that she hopes to fill with beads, and my wife, Alex will usually bring a 12 pack of LaCroix (I will carry it back to the car post parade because no one will drink it on the parade route). 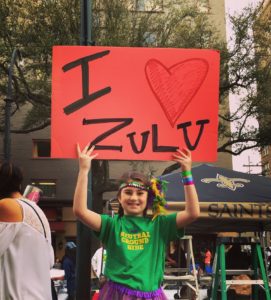 When the kids were little I absolutely loved the ladder. I would put Lucy and Preston in it, they were safe, secure, and in 1 spot. They were a captive audience, and had no choice but to sit there and smile for the 100 pictures we made them take. They had an unobstructed view of the best free show on earth, New Orleans Mardi Gras. Now, they want to see their friends at Mardi Gras, and I will struggle to get 1 picture of them together.

Change is inevitable; it is the train that is always on time and things are no different here in Beau Chene. When I moved to Beau Chene back in 2005 when Preston was 6 months old he was the only child around. Alex and I were the young parents. Boom, fast forward 13 years, and I am the old parent, but Alex is still the young hip mom. There are kids all over the neighborhood. My next-door neighbors, Megan and Brandon, are younger than my little sister and have the cutest little kids we have ever seen.

Change is coming fast and furious to the Beau Chene Marina. The new owners have been working tirelessly for months to get ready for the boating season which is almost here. Their new office looks fantastic, and the residents that I have spoken to in the marina are thrilled with the change. The marina entrance is also up for a complete renovation. The Department of Transportation has signed off on the new entrance and exit lanes. Matt Voelkel of MV Designs is almost done with the design of the new guard house and we can expect the construction to begin sooner than later.

The Beau Chene Homeowners Association is not immune to change. As the residents have gotten younger and younger, we have been forced to change our communications habits. The HOA now has an Instagram account, a Facebook account, and an interactive website. The board has also welcomed the opportunity to work hand in hand with the Beau Chene Country Club on community wide projects like 4th of July Fireworks for All Residents of Beau Chene.

To all the young parents in Beau Chene who will be using Mardi Gras ladders this season I would like to give you 3 pieces of advice; 1. Strap the ladder down tight as it will be windy on the causeway. 2. Don’t leave the ladder out overnight as Mayor Cantrell has vowed to destroy them if you do. 3. Enjoy the ladder because kids at Mardi Gras are the best.

On behalf of the Beau Chene Homeowners Association, I would like to wish all residents a safe and happy Mardi Gras season.