A Letter From Cristina Donovan

In recent magazine articles, emails and social media posts, I have communicated an overriding goal developed from our Re-Image Master Plan to improve upon the safety, security, and social aspects of the community. To build upon the natural and manmade resources to provide safer walkability and recreational opportunities for residents, we implemented street re-designs in late 2017 as approved by the Board of Directors. The street re-design includes pedestrian walking paths and crosswalks around a central loop and secondary access paths. 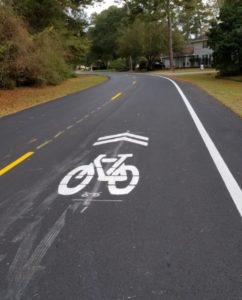 The photos display some of the new markings mentioned above that are found on our re-designed streets. The bicycle symbol with the double directional arrow is the standard marking for a shared bike and vehicular lane traveling in the same direction. The marked crosswalks provide designated crossings for pedestrians to transition from one side of the street to the other. The new stop bars are placed within a few feet of the stop signs to signal the vehicular drivers where to stop. 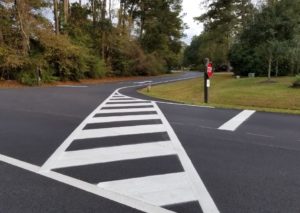 I have received very positive feedback from residents about various aspects of the street re-design. Drivers of motor vehicles, on average, are slowing down and more aware of both the bikers and pedestrians. We have many miles of roadway within Beau Chene (a total of 17 miles) for bikers and pedestrians to explore and we hope the designated pedestrian walking paths on the re-designed streets will encourage more social interaction and promote healthier and more active lifestyles for our residents.